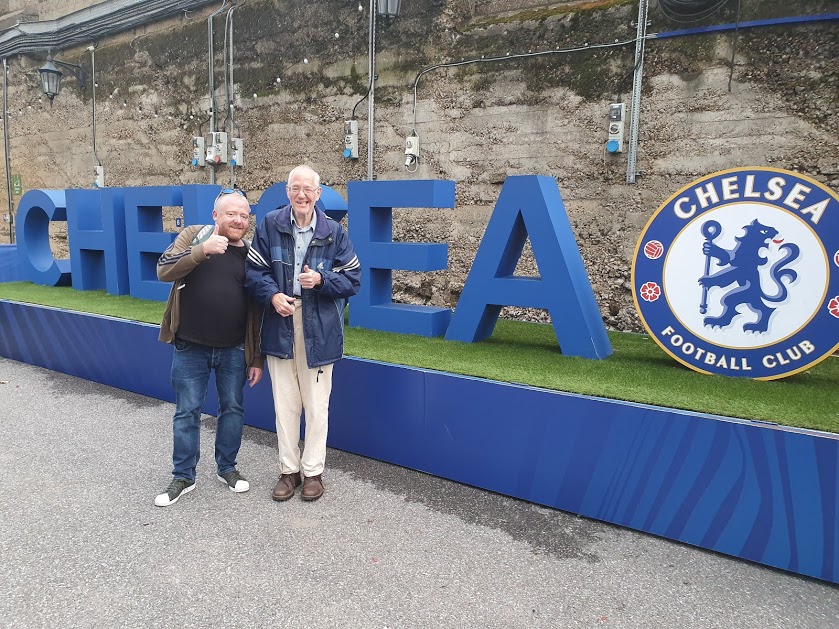 I first started supporting Tony about 3 years ago, we were placed together as he is known to love going to the cinema, and I’m really into films and always know what’s new, and we have been a great fit from the start, especially as on Tuesdays, our regular support day, I can get him into the Cineworld at Brighton Marina for nothing with my Unlimited Pass combined with Meerkat movies codes.

Tony is in his early 60s and lived at home with his mother for most of his life, until she passed away, when he moved in with his sister Sandra, who is widowed and lives with her two adult children, Jake, who has autism, and Abigail, and they are a tight-knit and loving family unit, with a strong Christian faith.

Tony also has autism, and he isn’t very verbal, especially when you first meet him, but we became comfortable with each other quite quickly, and having seen a lot of films together, I approached Sandra with the idea of supporting him a bit further afield: Tony is a big fan of Nottingham Forest FC, but with the geographical distance between Hove and Nottingham he had never been able to see them play live. My predecessor as his support worker had planned to take him to the Amex Stadium to see them when they played away at Albion, but Albion had inconveniently got themselves promoted to the Premier League, while Forest are still in the Championship, so there was no prospect of Forest visiting Brighton any time soon.

I hit on the idea of supporting him to London for the day, to watch when Forest visited Fulham FC, and Sandra thought it was a great idea, as did Tony (I approached Sandra first as I didn’t want to get Tony’s hopes up if it wasn’t a viable plan). Anyway, after a long wait, the big day came and it was a tremendous success, other than the scoreline from a Forest perspective, but Tony absolutely loved it anyway. At the football, Tony really comes alive, he is far more verbal and confident than you are likely to see him anywhere else, and he really gets in to calling out and cheering on the team, laughing at other people’s comments and having a great time.

Emboldened by this, both his enjoyment of the game and his calmness when travelling, I approached Sandra again and suggested that maybe I could take Tony all the way to the Holy Grail: The City Ground, the home of Nottingham Forest FC. Again she agreed, we selected their home game against Norwich, and again it was a great success (despite, once again, the scoreline). Tony was excited to see the City Ground, to sing along with the City Ground anthem at the start of the game, to buy a Forest scarf and to have his picture taken in front of the Brian Clough stand. He was also very confident and happy with all the travel (it was a 15 hour day!), and a pleasure to support on such a long outing.

Since then we have seen Forest a couple more times, though the distance to Nottingham makes it hard to go there often, especially as the train fares are very expensive, but we did see them play against Chelsea at Stamford Bridge in the FA Cup in January 2019, in a 2-0 loss. We were also sat among the Chelsea fans (of which I am one, although at that point, not a frequent attendee) and Tony was fine, not at all phased or nervous.

In August 2019, at the start of the current season, I decided to go to a lot more Chelsea games this year, as my joint-favourite former player, Frank Lampard, had become manager, with a brief to bring through talented youngsters from our academy, and this excited me greatly. One of our earliest games in the season was a League Cup game at home to Grimsby Town, and as tickets were so cheap, only £10 each, I thought of asking Sandra if it was ok to offer Tony to come with me. She okayed it, and as luck would have it, on the day of the game a friend gave me free corporate tickets, which entitled us to a free slap-up meal before the game, comfier seats with a great view and free pies at full time! On top of this Chelsea won 7-1, it was a brilliant night, and soon Sandra suggested that Tony might be up for coming to more Chelsea games as he’d enjoyed himself so much.

And that’s where we are at the moment: Tony has started coming to a couple of home games with me each month, and he’s loving it (we both are). His family are teasing him that he’s now purple, as he’s mixing the red of Forest with the blue of Chelsea, and he’s really keeping up on Chelsea’s fixtures and opposition. He’s been to his first ever Champions League games, against Ajax and Lille, and with Bayern Munich coming up. We have our little match day rituals in place now (he buys the programmes, I buy the half-time pies), he’s watched us play against the likes of Manchester United in the cup, and we have tickets in the bag for league games against Arsenal and Spurs, we’ve seen Chelsea play away at Albion on New Years Day, a nice quick journey for once, and we’re hoping to see them play away at Bournemouth in February. He’s even seen us lose at home to Southampton on Boxing Day and that hasn’t put him off!

His own team, Forest, are doing great in the Championship and are looking like they have a decent chance of being promoted to the Premier League, which would hopefully bring them down to Stamford Bridge and the Amex a bit more often, and in fact so far this season we’ve seen Forest twice, up in Nottingham at home to Cardiff, and in a huge coincidence, they were drawn at Chelsea again in the FA Cup 3rd Round in January for the second season in a row. True to form, with us watching, Forest lost both matches, but one day we fully intend to see them win a game!

This whole new footballing adventure has really thrilled Tony, and his family are delighted as well, as his sister Sandra says: “He’s absolutely over the moon with all the football he’s going to, it’s better than a lottery win for him. If our mum could see him now she’d be so happy for him.”